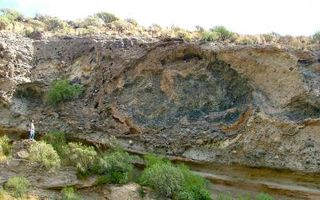 Research team member Pablo Dávila-Harris looks at part of the huge landslide deposit discovered on Tenerife, showing the chaotic and shattered rubble from the collapsed volcano. (The central dark debris-block is about 15 meters in diameter and must weigh many tons).
(Image: © Pablo Dávila-Harris.)

The remains of a monstrous ancient landslide have been discovered in the Canary Islands.

The remnants are one of the world's best-preserved examples of a huge landslide that followed a mammoth volcanic eruption, allowing a team of researchers to pinpoint the date that the landslide occurred.

During what is known as a volcanic flank collapse, the southeast slopes of the island of Tenerife collapsed into the sea around 733,000 years ago during the eruption. A growing dome of hot lava pushed the side of the volcano outwards and triggered the landslide. The volcanic flank collapse traveled 10.5 miles (17 kilometers) to the shoreline and then farther into the ocean.

These landslides are poorly understood, largely because they happen about once every 25 years and the remains are spread out over the ocean floor, according to Dave Petley, author of the American Geophysical Union's Landslide Blog.

"Fieldwork at 4 km [2.5 mile] water depth remains difficult, even if you are really good at holding your breath," Petley, who was not a member of the study team,wrote.

The onshore remains of the Tenerife landslide were discovered amid the canyons and ravines of the island's desert landscape by volcanologists at the University of Leicester in the United Kingdom. The remains onshore were 164 feet (50 meters) thick over an area of 35 square miles (90 square km).

"It is one of the world's best-preserved accessible examples of such an awesome phenomenon, because the debris from such landslides mostly spreads far across the deep ocean floor, inaccessible for close study," said study team member Mike Branney of the University of Leicester.

The Tenerife rubble includes blocks of rapidly chilled lava, added as the volcano erupted. Radioactive minerals within them enabled the researchers' colleague, Michael Storey at Roskilde University in Denmark, to provide such a precise date for this natural catastrophe. [Related: The World's 5 Most Active Volcanoes]

In the aftermath of the eruption and landslide, lakes formed as rivers were dammed by debris, and the change to the shape of the island altered the course of explosive volcanic eruptions there for hundreds of thousands of years afterwards, Branney said in a statement.

The researchers said that such phenomena are common but infrequent, and understanding them is vital so that researchers can better predict where and when landslides may occur. Their effects go far beyond a single ocean island. Tsunamis generated from such events may devastate coastlines thousands of miles away.

"Understanding the Earth's more violent events will help us be prepared, should repeat performances threaten," the geologists said.

The findings have been published in the October edition of the journal Geology.