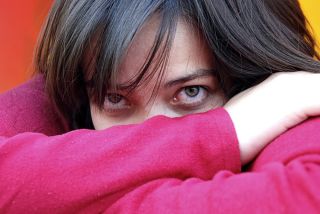 For 10 years, Jeannie Bush rose at 4 a.m. and slipped out of bed to shave her face before sneaking back under the covers, terrified that if she didn't, her husband would snuggle up to her in the morning and become disgusted at the hair on her jaw and chin.

"What an absolute turn-off I felt that would be," Bush, a 55-year-old electrologist in La Crosse, Wis., told LiveScience. "So I hid it."

Hiding her facial hair defined Bush's daily life for decades, starting when she was a teen and continuing until, at age 35, she met a doctor who recognized her excessive hair as a symptom of the hormonal condition polycystic ovary syndrome (PCOS). Treatment for the underlying condition, along with electrolysis, freed Bush from her daily shaving regimen. But she still remembers the shame she felt about her "unfeminine" symptom. Even the moment when her doctor noticed the facial hair was embarrassing, Bush said.

"At first, I was very hurt, because I thought I hid it so well, and she saw it," Bush said.

The embarrassment Bush felt about her symptoms isn't unique. Many people go without treatment when their medical problems involve stigmatized body parts, such as the bowels; journalist Katie Couric's on-air colon cancer screening in 2000 was an effort to combat that stigma surrounding the disease that killed her husband. But when symptoms are traditionally associated with manliness, the shame is often rooted in a fear of being unfeminine or undesirable. [5 Reasons Being a Woman is Good For Your Health]

"As a woman, I think you really start to feel less than a woman, because you're very different," said Sophia Wastler, 36, who directs an enrichment program for preschool kids in Virginia Beach, Va. Wastler has hyperhidrosis, or excessive sweating, which went untreated until she was 31.

In some cases, the effort of hiding the symptom spills over into the doctor's office, meaning they don't seek help. Bush's complaints about her excess hair had been brushed aside by doctors before, so she hadn't intended to mention it to her new doctor until the woman gently brought it up. Wastler was used to making excuses about her sweaty palms, but shaking a new doctor's hand one day, she finally snapped.

"Instead of making an excuse that day, I said, 'You know what, my hands are sweaty, I don't know why.'" Wastler said. "And he said, 'You have hyperhidrosis.'"

The simple-as-that diagnosis and treatment changed her life, said Wastler, who now gets periodic Botox shots in her hands to stop the sweating.

Hyperhidrosis isn't just a little extra sweat, said Dee Anna Glaser, a dermatologist at the Saint Louis University School of Medicine in Missouri and the president of the International Hyperhidrosis Society (IHHS). Patients sweat through their clothes even when they aren't warm; teenagers may turn in smeared, sweaty homework. Wastler remembers a particularly humiliating moment in dance class when she ended up standing in a puddle of her own sweat, the whole room staring.

"We still have the problem of social stigma where patients are so embarrassed by it that they don't even want to talk to their family doctor or their parents," Glaser told LiveScience. In her office, she said, a teenager will venture to bring up excess sweating during a checkup, and the parent will often be shocked because the child has been working so hard to hide the condition.

While hyperhidrosis affects both sexes equally, about 66 percent of those seeking treatment are women, Glaser said. That may be because women are more distressed by excess sweat, she said; also women tend to be more open to seeking medical care than men, regardless of the condition.

Likewise, the excess facial hair seen in PCOS can be a mental burden, especially for teenagers, said Diana Dowdy, a certified nurse-midwife in Huntsville, Ala., who studied the psychological effects of PCOS for her doctorate degree. Symptoms of PCOS, which often include acne, obesity and painful menstrual periods, begin to emerge in the teenage years, the result of abnormal hormone levels. Girls often spend major time and money on makeup and hair removal in an attempt to fit in, Dowdy told LiveScience.

"When we begin to talk about these things, they are so relieved that there is a condition they can blame this on, that they're not terribly masculine or that there's something wrong with their gender," Dowdy said.

To that end, both patients and medical professionals agree: If there is something wrong, talk to a doctor, no matter how embarrassing or hopeless it might seem.

"I would just say, we can usually find something for everyone," Glaser said of hyperhidrosis treatments. The IHHS maintains a physician finder at sweathelp.org to direct patients to doctors with an expertise in the disorder. The simple realization that symptoms are the result of a medical condition and not due to something "wrong" with the person, can lift a huge burden, Glaser said.

Since starting treatment, "it's like I'm a completely new person," she said. "I left my job, I started a company, I met my husband. … the whole psychological veil of hiding just came off."