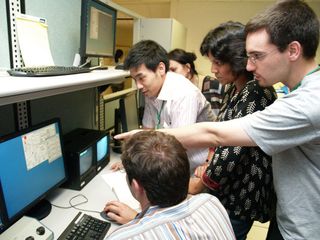 Student participants in the Exotic Beam Summer School gathered around computer monitors to track the progress of their experiments.
(Image: © Martina Matosova-Vadovska)

The metamorphosis of a student into a full-fledged scientist takes years, but the Exotic Beam Summer School helps accelerate—so to speak—the process.

In August 2007, 45 nuclear physics students from eight countries gathered at the National Superconducting Cyclotron Laboratory (NSCL) at Michigan State University for the one-week boot camp to subject themselves to the transformation.

There, the students delved into the world of nuclei, the cores of atoms. The journey of nuclei begins at the cyclotron, an accelerator that speeds isotopes to up to half the speed of light. The nuclei flying out of the cyclotron smash into a target made of beryllium, resulting in millions of flying particles per second containing dozens of different isotopes.

Many nuclear physicists are interested in rare nuclei because they yield unique information from their perch on the edge of nuclear existence, clues about the structure of these minute particles and hints that reveal secrets about the origins of the elements.

Downstream from the cyclotron, a complex system of magnets filters out the few desired nuclei from billions of flying particles. Normally, a team of specialists would perform the intricate tweakings of the knobs and buttons that would sift out the few precious particles. NSCL beam physicist Marc Hausmann estimates that getting the perfect filtering for an experiment takes from 6 to 24 hours.  But for this 24-hour period, the summer school students were in full command.

"Identifying a particle is like identifying one person in the whole world population," said Giuseppe Lorusso, a third-year NSCL graduate student and summer school participant.

In the culmination of all they learned during the week, six groups took turns performing four-hour runs of the beam. This year, simulating the process to a new discovery, students set out to produce phosphorous-35—heavier than the common version of the element—and measure the isotope’s half-life.

"What the students would have learned in one semester in a good nuclear physics course is probably what they learned in this one week," said Raman Anantaraman, assistant director of user relation at NSCL and head coordinator of the summer school.

Shortly after 5 p.m. on the second-to-last day of the program, seven arising experimentalists hovered tensely over a computer screen in the control room. Everybody’s faculties were fixed on the monitor, the remote control for the beam’s path.

Occasionally, a couple of students madly scribbled on a piece of paper, performing the last minute calculations necessary to conduct the seemingly endless tweaking of digital knobs and buttons to get an accurate result. Each modification helped them choose the proper target, magnet strengths, and so-called "wedges" to focus the beam just like a mirror focuses light and to separate different isotopes in a manner similar to a prism separating light by color.

Ultimately, the team produced a graph with a few dozen colored "potatoes" that looked faintly like a school of fish, a chart that helped identify the particle of interest

At the two-hour mark, the students discovered that something was not quite right. A short moment of panic took hold, but after half an hour of flocking between the four computers and more mad scribbling, the students realized they had been looking at the wrong "blob"—and thus had identified the wrong particle.  A re-examining of the chart and extensive discussions finally brought them to the right potato.

As one student entered some numbers into his computer, the anticipation built until finally the half-life was revealed: 51.7 seconds – a result within two seconds of the official, published value which has been found through years of experts’ experiments. Through the rest of the night and into the next evening, new groups arrived every four hours to undergo the same induction into the world of experimental physics.  The midnight training is an important part to becoming a true physicist, said Andreas Stolz, an NSCL beam physicist and lecturer at the summer school.

"Learning to do research means doing research," Stolz said. "It’s like learning to swim. You start in shallow water, and then it gets deeper and colder, and by that time you can swim.  At the very end you let the sharks in."