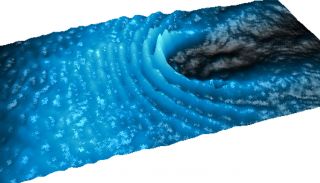 For several centuries now, scientists have known that light behaves like a wave, expanding out from its source until absorbed or reflected by objects, which are in turn illuminated.

In recent years, however, research has indicated that light can also behave like a liquid — flowing around objects and reconstituting on the other side. Previously, this phenomenon has only been observed under certain extreme conditions, such as laboratory chambers chilled to near absolute zero.

New research published this week in the journal Nature Physics reveals that light can behave in an even stranger "superliquid" state, in which light particles flow around objects with no friction or viscosity at all. In this state, light exhibits the dramatic effect of "frictionless flow," bending around obstacles with no ripples or swirls whatsoever. Interestingly, this effect can be observed at room temperature and ambient pressure.

You'll need some equipment, though. Scientists from CNR Nanotec of Lecce, Italy, in collaboration with École Polytechnique de Montreal in Canada, Imperial College London, Università del Salento in Italy, and Aalto University in Finland, produced the effect by sandwiching a thin layer of organic molecules between two ultra-reflective mirrors, producing what is in effect a light-matter hybrid fluid.

"In this way, we can combine the properties of photons — such as their light effective mass and fast velocity — with strong interactions due to the electrons within the molecules," Stéphane Kéna-Cohen of École Polytechnique de Montreal said in a statement. "Under normal conditions, a fluid ripples and whirls around anything that interferes with its flow. In a superfluid, this turbulence is suppressed around obstacles, causing the flow to continue on its way unaltered."

RELATED: New 2D Materials Could Conduct Electricity Near the Speed of Light

This state of superfluidity is sometimes referred to as the fifth state of matter, or a Bose-Einstein condensate. Particles in this state behave like a single macroscopic wave, oscillating at the same frequency, and paradoxically combining the attributes of liquids, solids, and gases.

"The extraordinary observation in our work is that we have demonstrated that superfluidity can also occur at room-temperature, under ambient conditions, using light-matter particles called polaritons," said Daniele Sanvitto, who led the research group.

As to the practical effects of the discovery, the most readily evident benefit concerns superconducting materials that can move electricity around with virtually zero resistance, according to the research team. Typically, these materials need to be radically cooled, usually with liquid nitrogen. If engineers can find a way to harness superfluidity at room temperature, it could lead to new and improved photonic devices like lasers, LEDs, solar panels, and photovoltaic cells.

"The fact that such an effect is observed under ambient conditions can spark an enormous amount of future work," researchers from École Polytechnique de Montreal said in a statement. "Not only to study fundamental phenomena related to Bose-Einstein condensates, but also to conceive and design future photonic superfluid-based devices where losses are completely suppressed and new unexpected phenomena can be exploited."