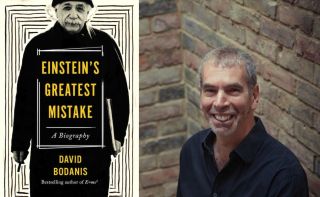 Widely considered the greatest genius of all time, Albert Einstein revolutionized our understanding of the cosmos with his general theory of relativity and helped lead us into the atomic age. Yet in the final decades of his life, he was ignored by most working scientists, and his ideas were opposed by even his closest friends. How did this happen? Einstein's imagination and self-confidence served him well when he was young. But when it came to the new field of quantum mechanics, the same traits undermined him. An intimate biography touching on the romances and rivalries of the celebrated physicist, as much as on his scientific goals, "Einstein's Greatest Mistake" reveals what we owe Einstein today — and how much more he might have achieved if not for his all-too-human flaws. Below is an excerpt from "Einstein's Greatest Mistake: A Biography" (Houghton Mifflin Harcourt, 2016).

Einstein should have been happy. Revered worldwide since Eddington's confirmation of his theory in 1919, he was awarded the Nobel Prize of 1921 for his work in theoretical physics. Movie stars and royalty wanted to be near him; the mobbed appearances continued. But amidst that acclaim, amidst that fame, Einstein began to worry about one consequence of his celebrated theory—and his professional angst was also compounded by growing stress in his personal life.

His divorce from Mileva Maríc (which had finally come through in 1919) had given him freedom, but it had distanced him from his two beloved sons. He tried writing them long chatty letters, but they were in no mood to accept their father's overtures. When he got them to visit him in Berlin, he purchased a telescope and put it on his balcony for them to use, but this didn’t help either. When Einstein did travel to Switzerland to take them on the sort of walking holidays they had liked before, everything was mannered, stilted. Once, in exasperation, he wrote to the elder boy, Hans Albert, from Berlin, taking him to task for being so cold. But Hans Albert was just as angry: his father was abandoning them, so how could he expect any kindness in return? Hans Albert later remembered that he felt as if a "gloomy veil" had come over what was left of their family life.

Einstein raged at Maríc for poisoning his children's minds against him, but he must have known that he was partly responsible—and for what? Life with Elsa Lowenthal hadn’t worked out as he had hoped. He had intended to keep the liaison strictly on his terms, having written to Besso in 1915 that it was "[an] excellent and truly enjoyable relationship . . . ; its stability will be guaranteed by the avoidance of marriage." Lowenthal, however, had a different view, and in June 1919—while Eddington was still on the tropical island of Principe—they had married. Almost immediately after the wedding, something changed. Maríc may have been resentful of the way she was left out of his scientific discussions, but at least she had understood the main lines of his work. Yet although Lowenthal’s lack of scientific education had been fine when Einstein was on the rebound, now he was discovering that behind her natural ebullience lay an intellect that left much to be desired. "She is no mental brainstorm," he later remarked.

During their courtship, Lowenthal had agreed with Einstein about the pleasures of an informal life and had enjoyed his mocking of wealthy, established Berliners. But once they moved into her seven-room apartment in a building with a grand lobby and a uniformed doorman, he felt trapped among her Persian carpets, heavy furniture, and display cabinets filled with fine porcelain. Some of her friends were thoughtful, but the majority, he was coming to see, were just chattering socialites. Worst of all, she began babying him. "I recall," her daughter wrote, "that my mother often said during lunch, 'Albert, eat: don't dream!'" It was all very far from romantic.

Soon Einstein began to have affairs. His mere presence, an architect who knew him well remembered, "acted upon women as a magnet acts on iron filings." Some of these women were younger than Elsa, some richer, and some both. What they saw was one of the most famous men on the planet, yet one who was unlike the stereotype of the desiccated intellectual. He was still fit and broad-shouldered (as friends who saw him take off his shirt noted); he loved telling wry Jewish jokes, and he had a direct, Swabian use of language. Actresses such as the renowned Luise Rainer soon wished to be seen with him. He spent evenings with a wealthy widow at her villa in Berlin and accompanied another woman, a fashionable entrepreneur, to concerts or the theater, riding with her in her chauffeured limousine.

The contrast between these other women and Elsa, with her chatter and her increasingly baffled disappointment, was painful for everyone. Einstein liked to go sailing, and when he did manage to find free time would head to their country house near a lake not far from Berlin, where he kept his sailboat Tümmler (German for "porpoise"). He would go out alone in the boat for hours, dreamingly adjusting the tiller as the winds skidded him here and there. His housekeeper described one regular visitor to the summer house when Elsa was away. "The Austrian woman was younger than Frau Professor," the maid recalled, "and was very attractive, lively, and liked to laugh a lot, just like the Professor." On one memorable occasion, Elsa found another woman's "article of clothing" still on the boat, and they had an argument that, in its cold fury, continued for weeks. Men and women were not designed to be monogamous, he insisted. Elsa confided to a few close friends that living with a genius was not easy—not easy at all.

This was not the marriage either of them had wished for. In the letter Einstein wrote to Besso’s adult children, consoling them after their father's death, he concluded: "What I admired most in him as a person was the fact that he managed for many years to live with his wife not only in peace but in continuing harmony—something in which I have rather shamefully failed twice."

If this were Einstein's only failure, it might have been bearable. But he was confronting an even worse problem. Even as early as 1917, at what should have been the peak of his accomplishment, Einstein had discovered what seemed to be a catastrophic flaw in his great G=T equation, and it had been preying on him ever more as the 1920s went on.

Einstein's Greatest Mistake
Amazon
$12.93
View
We check over 130 million products every day for the best prices