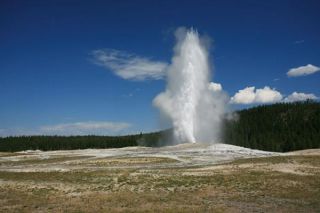 Yellowstone National Park has hot springs that can reach a scalding 150 degrees Fahrenheit (66 Celsius). But in recent years scientists have become interested in a different sort of hot spot — the area of hot molten rock flowing beneath the surface.

Researchers had figured this vast underground hotspot, which powers the park's famous geysers, would be off the charts. Not so, according to a new study.

"Although Yellowstone sits above a plume of hot material coming up from deep with the Earth, it's a remarkably 'lukewarm' plume" compared to other plumes around the world, said researcher Derek Schutt of Colorado State University.

The popular Wyoming tourist spot sits mostly inside the crater formed when a giant supervolcano erupted more than 600,000 years ago. The plume that shot up then covered half of today's United States with volcanic ash.

"Yellowstone is located atop of one of the few large volcanic hotspots on Earth," Schutt said.  "But though the hot material is a volcanic plume, it's cooler than others of its kind, such as one in Hawaii."

Schutt and Ken Dueker of the University of Wyoming used measurements made from new seismometers recently installed in the Yellowstone area to model how temperature affects the speed at which seismic energy travels. Based on this simulation, they estimated that Yellowstone's hotspot is 50 to 200 degrees Celsius hotter than its surroundings — for a hotspot, quite a puny boost, apparently.

The researchers suggest the relatively cool temperature might be because the hotspot's plume became disconnected from its heat source in Earth's core.

"Disconnected, however, does not mean extinct," said Schutt. "It would be a mistake to write off Yellowstone as a 'dead' volcano. A hot plume, even a slightly cooler one, is still hot."

The study, funded by the National Science Foundation (NSF)'s division of earth sciences, was detailed in the August 2008 issue of the journal Geology.