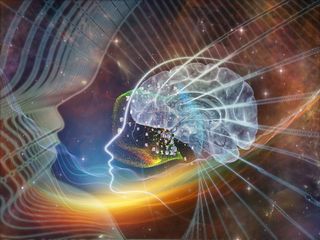 A 48-year-old woman in Switzerland stabbed herself several times in the chest, claiming  she heard divine voices that instructed her to commit the act as a religious sacrifice, a recent report of the woman's case reveals.

But doctors suspect that these "heavenly" voices likely had an earthly cause; namely, a slow-growing brain tumor that could've caused the woman's religious delusions, according to the case report, which was published Nov. 14in the journal Frontiers in Psychiatry.

Dr. Sebastian Walther, a psychiatrist at the University Hospital of Psychiatry in Bern, Switzerland, and a co-author of the report, said it's unusual to see a case like this. [27 Oddest Case Reports]

What makes the case unique is the suspected link between the location of the brain tumor and its disruption of brain networks that probably led to the woman's religious delusions and hearing of divine voices, Walther told Live Science.

When the woman showed up in the emergency room with deep gashes on her chest from self-inflicted stab wounds, she was seen by psychiatrists to evaluate her mental health, according to the report.

As doctors spoke with the woman about why she wanted to hurt herself, she told them that for the past three years, she had a strong feeling of being blessed, and she had been communicating with divine voices she considered to be "heavenly."

The Swiss woman explained that she heard two different divine voices, and that she would engage in religious-oriented conversations with both for hours at a time, according to the case report.

She heard these voices daily for several weeks or months at a time, and says they were giving her instructions or commenting on her actions, Walther said. This made her feel safe and close to God, or horrified, depending on what the voices said, he added.

Because the woman was experiencing religious delusions and persistent "auditory verbal hallucinations" in which she heard divine voices, the psychiatrists diagnosed her with psychosis, a condition in which a person loses contact with reality.

Religious delusions are quite frequent among people with psychosis, Walther said.

After doctors admitted the woman to the psychiatric unit of the hospital, they learned that this wasn't the first time she felt a strong interest in religion and spirituality. She described four previous times in her life, beginning at age 13 and again at ages 23, 32 and 41, when she experienced periods of intense spiritual and religious devotion.

During these periods, which lasted about a year or two, she would join Jehovah's Witnesses and then later resign, when she lost interest, according to the report.

As part of her psychiatric evaluation, the woman also underwent an MRI. The scan detected a brain tumor.

It turned out that the tumor — which probably appeared first in childhood or adolescence — was very slow-growing, and likely periodically affected her behavior since her teenage years, Walther said.

Indeed, the doctors suspected that her four previous episodes of intense religious devotion might have been a symptom of the tumor's progression, according to the case report.

The tumor affected areas of the brain involved in processing sound, which is possibly why she may have heard "divine" voices, but it also affected networks that influence a person's emotions, Walther said.

It's not clear why the woman's periodic devotion to religion eventually caused her to experience a psychotic episode in which she tried to severely injure herself.

The more likely explanation is that the tumor's slow growth periodically altered brain networks responsible for a strong interest in religion and spirituality, Walther said. But it's also possible that the occurrence of the brain tumor and psychotic episode were both due to chance, he said.

The woman did not receive any treatment for the tumor, which did not show signs of additional growth, Walther said. Because the tumor was located in a very delicate part of the brain, neither surgery nor radiation were recommended, he noted.

Ultimately, the woman was given antipsychotic medication to reduce the frequency of her hallucinations, Walther said. When the dose of this medication was reduced, the woman still showed signs of an above-average interest in religion, he said.

The last time Walther had contact with the woman, she had decided to taper off her medication and had started hearing voices again.