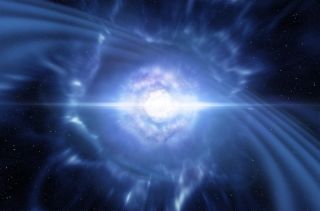 Don Lincoln is a senior scientist at the U.S. Department of Energy's Fermilab, the country's largest Large Hadron Collider research institution. He also writes about science for the public, including his recent "The Large Hadron Collider: The Extraordinary Story of the Higgs Boson and Other Stuff That Will Blow Your Mind" (Johns Hopkins University Press, 2014). You can follow him on Facebook. Lincoln contributed this article to Live Science's Expert Voices: Op-Ed & Insights.

The gravitational-wave research community seems to be having a remarkable string of good luck.

A few weeks ago, two research teams named for the corresponding gravitational-wave detectors — the LIGO and Virgo collaborations — made their first announcement of the joint detection of these ripples in the fabric of space-time. The ripples were generated by highly energetic smash-ups — in this case a pair of black holes merging. A few days later, the Nobel Prize committee announced it had awarded the 2017 Nobel Prize in physics to a trio of physicists for their roles in making it possible to detect gravitational waves at all.

And today (Oct. 16), the two collaborations made yet another spectacular announcement. On Aug. 17, they detected gravitational waves in association with a distant flash of visible light that was seen by a bevy of powerful telescopes. This time, the observation was of the merging, not of black holes, but of two neutron stars — extremely dense stellar carcasses. More precisely, the two LIGO detectors, in Louisiana and Washington state, observed these waves — and Virgo, near Pisa, Italy, did not. This means that the event occurred in a Virgo blind spot, which helped determine the location of the merger. [Gravitational Waves from Neutron Stars: The Discovery Explained]

Less than 2 seconds after LIGO detected the gravitational waves, two orbiting satellites spied the universe's most powerful type of explosion, called a gamma-ray burst. The burst originated from NGC 4993, an elliptical galaxy about 130 million light-years away in the constellation Hydra. Using a set of protocols long set in place for such gravitational-wave detections, collaboration leaders from LIGO and Virgo notified the members of the world’s astronomical community, who turned their telescopes to the section of the southern sky from where the gamma-rays and gravitational waves originated. There, astronomers found a new light in the sky.

The observation of visible light in conjunction with gravitational waves is different from earlier examples of these cosmic ripples and implies that a different mechanism was the cause. Pairs of black holes merge invisibly, but a pair of neutron stars slamming into each other is quite a different beast. Events like those are cataclysmic, heating matter to unfathomable temperatures and blasting light across the cosmos. [The Top 10 Greatest Explosions Ever]

Neutron stars are stellar remnants that occur when large stars go supernova, causing their cores to collapse. When the cores collapse, the protons and electrons of the star's atoms are merged together to become neutrons. The outcome is essentially a city-size ball of tightly packed neutrons, but with a mass similar to that of our own sun. Neutron star matter is incredibly dense — so much so that a thimbleful of it would weigh as much as a small mountain.

Above a certain threshold mass, neutron stars cannot exist, because their gravity becomes so large that the stars collapse into black holes. The exact mass at which this collapse occurs is uncertain, but it depends on both the temperature of the neutron-star matter and how fast the neutron star spins.

While we cannot be sure, it seems more likely that the result is a black hole. That's because the formation of a black hole is often accompanied by a burst of gamma-rays. If the outcome is a larger neutron star, the debris from the collision should trap the gamma-rays before they escape. Given that a gamma-ray burst was observed, the first option is considered more likely. But it is too soon to be certain either way.

So what do we know about the incident reported today? In what is no doubt becoming an overused joke, a long time ago in a galaxy far, far away, two neutron stars orbited each other. Over the eons, they emitted an imperceptible amount of gravitational waves, which carried away energy.

Albert Einstein predicted the existence of gravitational waves in 1916, as a consequence of his theory of general relativity. General relativity explains the behavior of gravity as the bending of space and time. Massive objects literally distort the shape of the cosmos. And when those objects move, they can set up waves in space that travel away at the speed of light, much like ripples formed when pebbles are dropped into a pond. [8 Ways You Can See Einstein's Theory of Relativity in Real Life]

As the orbiting neutron stars lost energy from gravitational radiation, the radius of their orbit decreased and sped up. In the final moments before the two stars coalesced, they were traveling at near the speed of light. Because neutron stars are lower in mass and larger in size than black holes, they were farther apart from each other than in previously observed black hole mergers. This means that the gravitational waves that were emitted are much smaller than has been seen in earlier announcements of similar events. Because of that, our gravitational-wave detectors are only sensitive to neutron-star collisions that are much closer to Earth. In addition, the gravitational waves have different characteristics. When two neutron stars merge, the detectable gravitational waves can persist for about a minute. In contrast, the observed merging of pairs of black holes took a mere fraction of a second.

The gravitational waves traveled across the cosmos until they crossed the solar system. Three detectors on Earth — two in the U.S. (LIGO) and one in Italy (Virgo) — watched for the subtle stretching and compressing of space as the gravitational waves passed by. Each detector is the shape of an L, with each leg being about 2 miles (3.2 kilometers) long. Using lasers and mirrors, this equipment can detect changes much smaller than a proton in the length of each leg of the L. The sensitivity is equivalent to measuring the distance from here to Alpha Centauri and being able to see changes as small as the thickness of a human hair.

As the gravitational waves were emitted, so were gamma-rays. They also traveled the 130 million light-years between NGC 4993 and Earth and were observed by the NASA Fermi and ESA INTEGRAL satellites.

A coterie of telescopes in Chile was luckily in position to be among the first to see a new, bright source that wasn't there before. For instance, the Blanco telescope revealed the identity of the location of the merger, although several other facilities made contemporaneous observations. Once the location was determined, other telescopes could join the effort, including NASA's Hubble Space Telescope and the Chandra X-ray Observatory. These observations occurred across the globe for the next two weeks.

So, of what use is this observation? Well, we have now entered a new era of astronomy. Researchers are no longer limited to the electromagnetic spectrum when they search the heavens for spectacular cosmic events; they can now add gravitational observations to the mix.

But, more specifically, this measurement conclusively confirms that neutron-star mergers are one cause of gamma-ray bursts. This has long been suspected, but the simultaneous observation of gamma-rays and gravitational waves clinches it.

Merging neutron stars are also a source of the heaviest chemical elements found on Earth. This new observation will shed light on just how that happens. Already, measurements made from this event verified that gold, uranium and platinum were  created. Quite possibly, the gold of your or your parent's wedding ring originated in the merging of two neutron stars billions of years ago.

While today's measurement is an exciting one, it's important to remember that it's but a single observation. Even more thrilling is the fact that astronomers have just begun to exploit this capability. Gravitational-wave detectors are just beginning to tell us about some of the most violent events in the universe. I don't yet know what story they will tell us, but it's going to be fascinating.