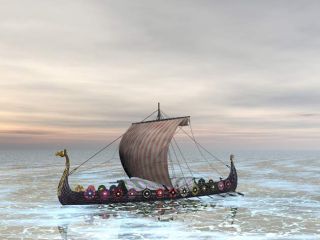 Monty Dobson, Inaugural Scholar at the School of Public Service and Global Citizenship, Central Michigan University, writes the Monty's World blog and is producing the documentary America: From the Ground Up!. He contributed this article to LiveScience’s Expert Voices: Op-Ed & Insights.

My obsession with all things Anglo-Saxon and Viking is well documented. I have worked at the world famous Jorvik Viking Centre in York England; my Ph.D. research included Viking age monuments; I am teaching a class in the History Department at Central Michigan University about the Vikings; and I can't resist pop culture references to Vikings – I've seen "Thor" more times than I care to admit.

According to my long-suffering wife Jacqueline, I am "way too obsessed with dead guys in boats" for my own good.  You get the point. The Vikings are my nerd obsession. So when the History Channel announced its first ever scripted docudrama "Vikings" I was more than a little too excited for my own good: Not least because I see it as a catalyst to engage the wider public in a conversation about archaeology and history.

Sadly the reaction of many of my peers to the series has been resoundingly negative. I have followed with interest as professional archaeologists and historians snipe bitterly about the inaccuracies in the program. OK, I admit it aggravates me, too. But we can use popular culture as a touchpoint to talk with the public about the science and history behind the series. People are excited about archaeology and history, we just aren't talking to them.

So what elements from a dramatized historical serial like "Vikings" could we use to foster engagement? Well, to start with, we should acknowledge what it is. Michael Hirst, who wrote the film "Elizabeth" and brought you HBO's soapy bodice ripper "The Tudors", created "Vikings". So we know Hirst is going to go for the sensational elements of Viking culture. And sometimes he gets it really wrong. [Medieval Torture's 10 Biggest Myths]

This is particularly noticeable in the costume design department. The "look" Hirst and company have gone for is a bit more seedy 70's leather bar than early medieval Scandinavia. I suppose it's the curse of video games and the HBO series "Game of Thrones" really, but we can use this type of thing as a teachable moment. For example, I had my students deconstruct the visuals in class and compare them to what we know archaeologically about Viking dress. The result was a good conversation about how popular culture can seep into our understanding of the past. Why do you think we have the popular misconception that Vikings had horns on their helmets?

I suppose I am less bothered by these factual lapses than some of my colleagues because I get that it's fiction. It is not a conference paper or journal article and let's face it, if it were no one would watch. This is where the television series can be beneficial to us as academics. (I do want to clarify that I am not talking about pseudo-science garbage like "Ancient Aliens"-type shows. Those shows are a whole different, stinking kettle of putrefied fish.) Dramatizations like Vikings can spark people's curiosity and move them to learn more about the subject. We just have to be willing to embrace their curiosity. As archaeologists and historians, we have the best stories in the history of humanity at our fingertips, and yet we are too often unwilling to share them, and can be terrible storytellers.

Like it or not, the series is having an impact on press coverage of Viking archaeology. One of the most popular recent topics has been the depiction of Viking navigational technology in the series, particularly the sunstone. Here we have a terrific chance to peel back the drapes on the scholarly process and let people see our disagreements.

Some argue that we have no hard evidence that Vikings used a type of crystal known as Icelandic Spar (calcite crystal) to track to sun on cloudy days or when it has dipped below the horizon. Others argue vociferously that we have sufficient evidence to go on, often citing a documentary reference to the use of a sunstone in an Icelandic saga. Recent research reported in Proceedings A, a journal of the Royal Society, demonstrates that the stone could be successfully used under certain conditions. "An Alderney-like crystal permits the observer to follow the azimuth of the sun, far below the horizon, with an accuracy as great as ±1°. The evolution of the Alderney crystal lends hope for identifying other calcite crystals in Viking shipwrecks, burials or settlements."

So let the debate rage, my friends. Let's use people's curiosity to draw them into the conversation. The public is not losing interest in history and the past, they just are not interested in technical jargon. If the public is turning to more welcoming sources for knowledge, it's not their fault, it's ours. We as professionals have failed to communicate our own value and we have failed to tell the interesting and fascinating stories about the human past that we know. A brown leather tunic in place of a more historically accurate red cloth is not the work of the Anti-Christ, it's a teachable moment. Climb down from the ivory tower and do your job.

The views expressed are those of the author and do not necessarily reflect the views of the publisher. Read Dobson’s most recent Op-Ed, Urgent Need to Protect United States' Historic Environment.