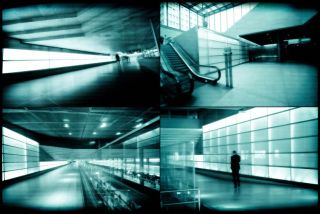 MIT has made a smarter decision-making system for automated surveillance systems to spot intruders.
(Image: © MIT)

Tomorrow's smart surveillance systems need to spot criminals, terrorists or suspicious packages quickly without raising the alarm every time a cat strolls past a security camera. MIT researchers have created a clever computer system that works like a human detective to automatically identify possible intruders.

The MIT system calculates how to best scan footage from security cameras — whether it should first use skin detection algorithms to ID a person or start with background detection to spot unusual objects. It prioritizes its sleuthing approach by first running tests to learn how fast each method takes in a given surveillance scenario.

"Sometimes it's important to come up with an alarm immediately, even if you are not yet positive exactly what it is happening," said Christopher Amato, a computer science postdoctoral researcher at MIT's Computer Science and Artificial Intelligence Laboratory. "If something bad is going on, you want to know about it as soon as possible."

That allows the system to speed up its analysis compared to blindly running through each detection algorithm — all the better for quickly figuring out whether a person is an innocent passerby or a hidden threat. Unlike humans, it can also keep an eye on potentially dozens of security camera feeds all at the same time.

"You can't have a person staring at every single screen, and even if you did the person might not know exactly what to look for," Amato said. "For example, a person is not going to be very good at searching through pages and pages of faces to try to match [an intruder] with a known criminal or terrorist."

Such an automated program could ID and track people of interest at an airport or shipping port, or focus on recognizing suspicious objects in strange or unusual locations at a train station. Overworked U.S. military analysts could also use such a system to avoid information overload while monitoring hundreds or thousands of hours of drone video footage.

The MIT researchers plan to present their work at the 24th IAAI Conference on Artificial Intelligence in Toronto in July. Follow InnovationNewsDaily on Twitter @News_Innovation, or on Facebook.