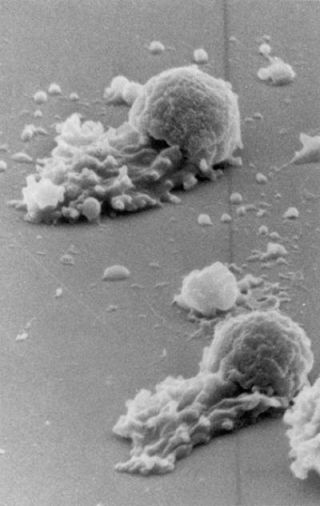 This image is an electron micrograph of two worm sperm on a microscope slide. Unlike most cells that rely on motor proteins to propel themselves forward, worm sperm use tiny fibers at their front ends — joining the fibers together and taking them apart sets the cells in motion.

Cells are constantly moving around in our bodies. That movement is critical for normal processes like developing embryos, warding off infections, rebuilding skin and bones, and establishing new nerve connections.

The cell movement process relies on filaments of a proteincalled actin. The filaments can gather together into bundles, web-like networks or even three-dimensional gels. They shorten or lengthen to allow cells to move and change shape. Often working with a protein partner called myosin, actin filaments make possible the muscle contractions necessary for everything from your own locomotion to the automatic beating of your heart.

When cell movement gets off-step, diseases may arise. For example, the transformation of a stationary cell into an invasive one is a crucial element of metastasis, the movement of cancer cells throughout the body. For such reasons, scientists are working to understand the fundamental, but very complicated,biology of cell motility.

But, even that is tricky. Some cells, particularly human ones, are complex. Isolating the movement machinery, and making it work like it does inside a live cell, can be challenging.

To develop a system for studying cell motility in unnatural conditions — a microscope slide instead of the body — Tom Roberts and Katsuya Shimabukuro at Florida State University disassembled and reconstituted the motility parts used by worm sperm cells.

The cells are similar to human cells, but have fewer moving parts, making them easier to take apart and rebuild. Once the researchers created conditions to promote natural pull-push crawling motions, they saw the biological machinery move just like it does in worm sperm in its natural setting.

The work may offer a new approach for studying cell movement and eventually could aid in the development of cancer therapies that target cell motility. For now, though, the next move will be determining if what the scientists learned also applies to more conventional crawling cells, including tumor cells.